"Summer Visits to the Degollado" Gets You a Backstage Pass 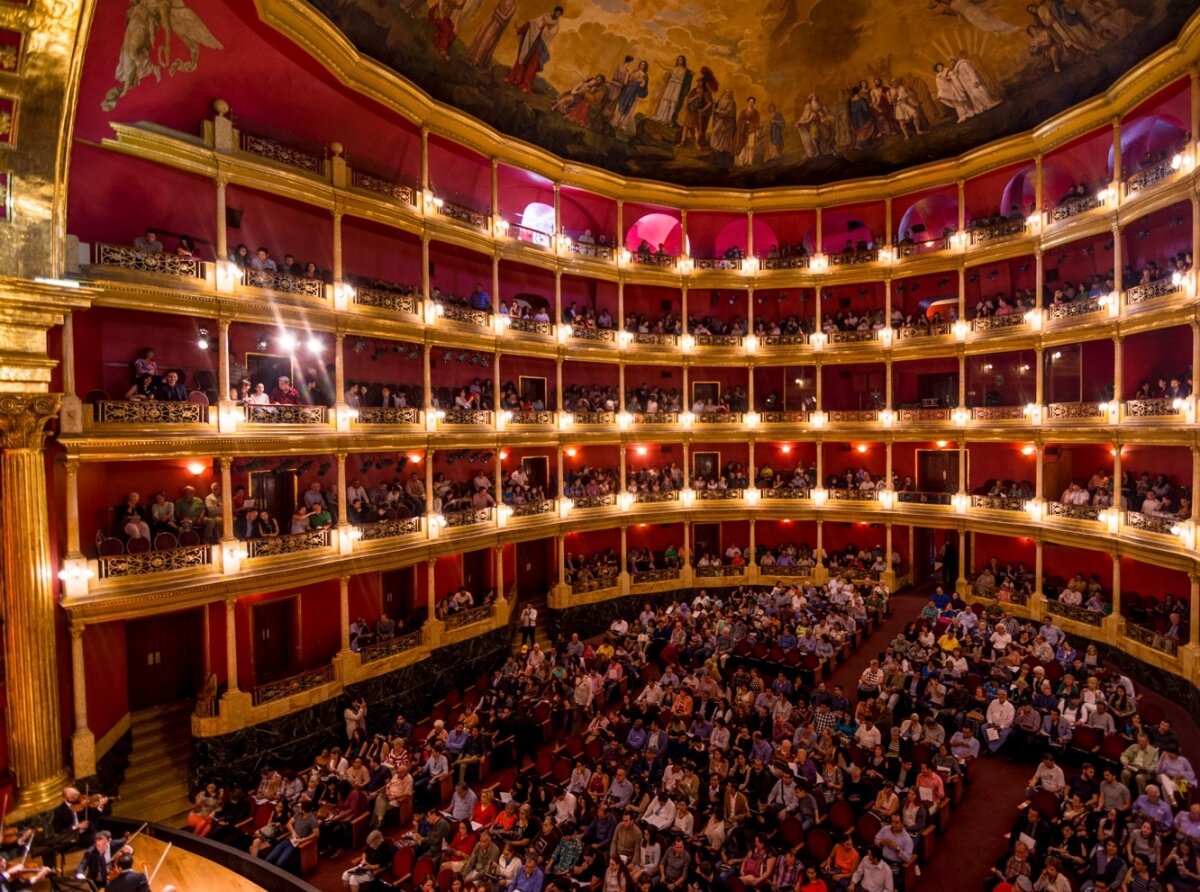 The Degollado Theater, an icon of Jalisco's cultural heritage, opens its doors for the public to get to know it while listening to the stories it keeps behind its walls.

In the "Summer Visits to the Degollado", which will be offered on Monday, August 9 and 16 at 12:00 hours, visitors will know not only the memories of the enclosure, but they will be able to walk through places as unusual for the public as the orchestral pit, the stage, or the dressing rooms.

In 1855 the idea of having a theater in Guadalajara that would prove worthy of the citizens of the state of Jalisco became fashionable, and the Illustrious Governor General Santos Degollado issued a decree for its construction.

The Architect Jacobo Gálvez, who designed and developed the project, placed the first stone in 1856. The original plan was to name the theater "Alarcón" after Juan Ruiz de Alarcón y Mendoza, the most notable Mexican playwright of the colonial era. However, after the death of General Degollado, it was decreed that the building be renamed in his honor.

The architectural style is neoclassic, and the recently restored building is now one of the best-preserved theaters in Latin America.

Its magnificent portico features a high relief Travertine marble frieze based on the theme "Apollo and the Muses" by sculptor Benito Castaneda, bearing an engraved inscription translated to "May the clamor of discord never arrive." 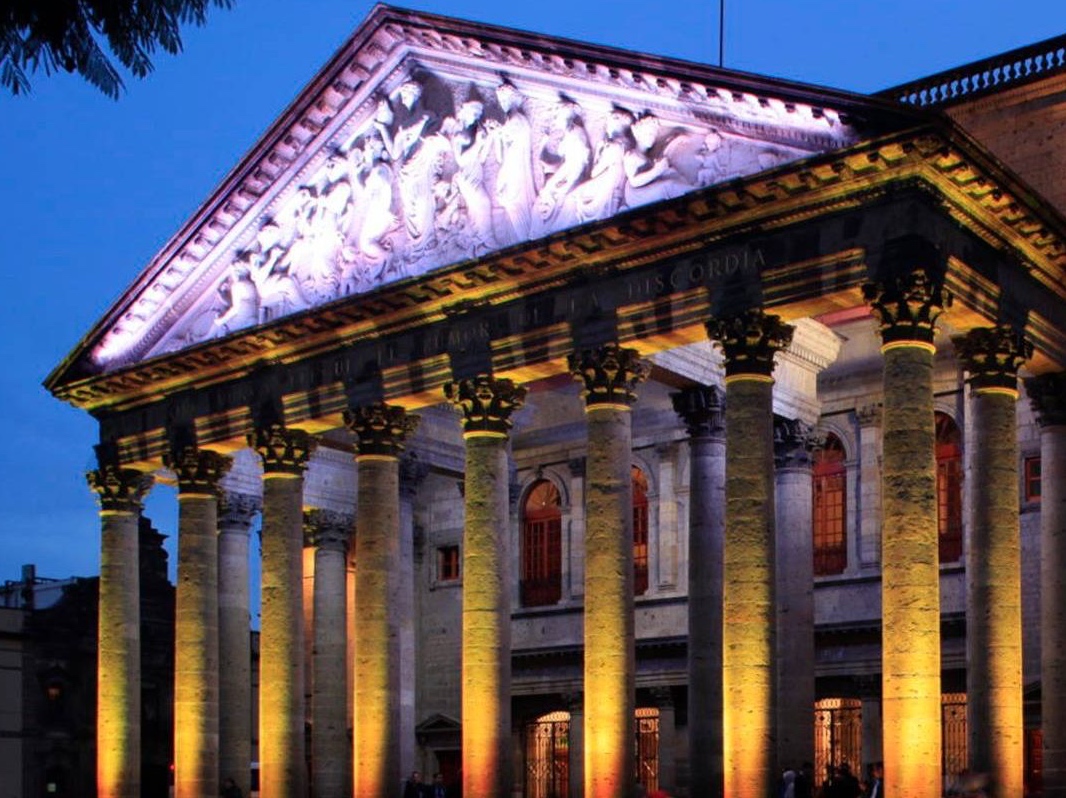 The tour begins at the Teatro Degollado’s main auditorium, very similar in design to the Teatro Della Scala in Milan. During the tour, the place can be photographed from different angles, and passers-by can take home the image of the mural that represents the “Canto Cuarto de la Divina Comedia,” by Dante Alighieri, made by the Jalisco painters Jacobo Gálvez, Gerardo Suárez and Carlos Villasenor.

Looking down from the ceiling, just above the proscenium arch, another noteworthy piece of artwork stands out: A colossal eagle carved of wood and bathed in gold leaf, holding a piece of chain in his beak, and a Mexican flag unfurling at its talons. One of the legends that has been told for generations is, "If the eagle were to drop the chain, it would announce the fall of the Teatro Degollado." 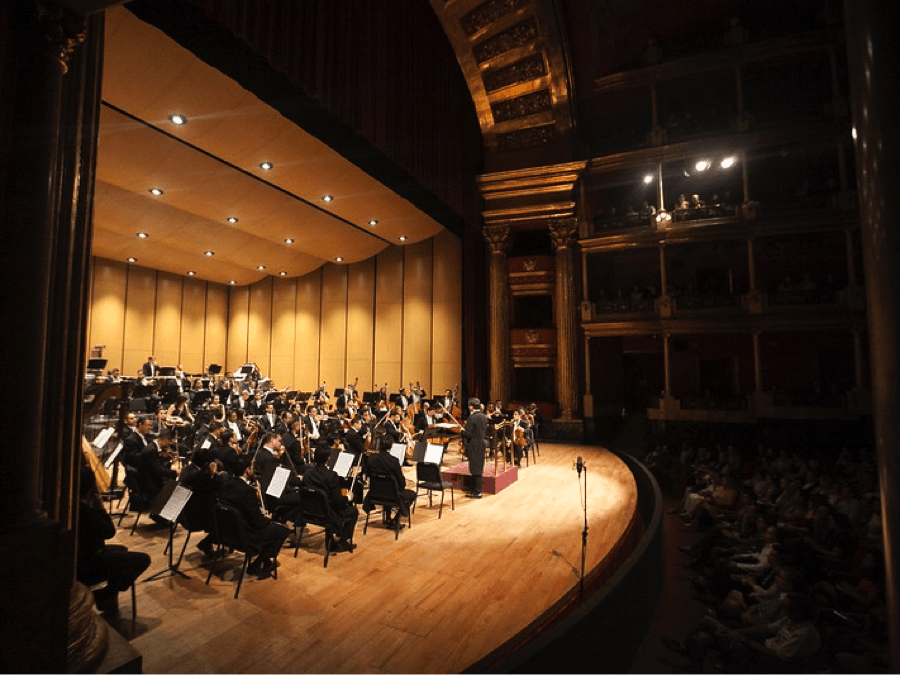 The next stop is on the stage, which with the illuminated room offers a view that normally only artists get to appreciate. The same happens with the dressing rooms, where the curious will know the places where characters such as the singer Plácido Domingo, the mime Marcel Marceau, or the dancer Anna Pávlova have prepared performances, among thousands more.

Later, the basement of the theater is explored. They begin with the Sala de Cámara, a space open to the public for concerts of small ensembles, and is also the entrance to the orchestra pit under the main stage, which can only be seen from the highest places in the theater on concert days. The Chamber Hall seats 120 people and is used for meetings, press conferences, chamber music performances, book presentations, and music appreciation lectures.

The visit concludes in the lobby, where guests are greeted by the "Goddess of Fortune," a sculpture originally carved in Carrara marble between the years of 1870 and 1880 by the Italian artist Carlo Nicoli, and restored in February, 2007 by the Architect Hugo Andres Testolini Deza

Relevant improvements in the Theater’s most recent renovation include the application of 23 ¾ karat gold leaf in such areas as the proscenium arch, the colossal eagle, framing columns, borders, other ornate decorations in the proscenium area, and the restoration of the backdrop originally made by Italian painter Carlos Fontana around 1880, entitled “Athenian Festival.”

Other significant improvements include new floors, seats, painting, lighting replacement, onstage flooring, the installation of a hydraulic platform, a new air conditioning system, and the remodeling of the backstage area, among others.

Nowadays, the theater is home to the Filarmónica de Jalisco as well as to cultural festivals, performances of live theatre, opera, and dance.

The "Summer Visits to the Degollado" have a duration of one hour and a general cost of 50 pesos. Following the recommendations of the authorities and reiterating the commitment to maintain cultural spaces as safe spaces, the influx is limited to 30 people, who must maintain a healthy distance and wear a facemask throughout the tour.

Tickets for the tour are on sale at the theater box office on the days of the tours, Monday, August 9 and 16, from 10:00 a.m. Subsequently, the Jalisco Ministry of Culture, through its official channels, will announce the dates of future tours, depending on the property's schedule.